Into Phrygia and the land of the Mevlevi

On a Wednesday morning showing promising signs of Spring, we set off from İstanbul, crossed the Sea of Marmara to Yalova and hopped on a Dolmuş (minibus) to İznik. The journey was made considerably smoother with the help of some Turks wanting to practise their English and showing us the way as part of the bargain.
İznik is an ancient town founded around 1000BC, famous in the West for holding the Council of Nicaea (325AD) which unified early Christian doctrine around the idea that Jesus was entirely divine, as well as entirely human. Indeed, the town still bears a strong Roman influence in its streetplan, fortified walls and other ruins. Venturing beyond the walls we immediately found ourselves in endless groves of Cypress and Olive trees interspersed with some curious shrines and tombs; the view from the hills above İznik afforded us with great views of the sunset and some welcome rural relief after the congested İstanbul. Unfortunately, the town is a shadow of its former self and many of the buildings have been recycled over the centuries. The hostel was great, with an eccentric host (See you later, toilet paper!), although the bathroom was again one big shower with a toilet - something of a Turkish custom.
The ten-hour, 500 km bus ride to Konya (via Bursa) was made more bearable by a man offering tea (çay), coffee, water and food; all included in the €20 price. The plains in central Turkey consist mostly of deserted steppe dotted with large snow-capped mountains and since the sun set mid way through the journey, I had time to learn some Turkish.
Konya, the breadbasket of Turkey, is a booming industrial town and the ancient capital of the Selçuk Empire. However, Rumi Mevlava and the Islamic cult of Mevlevi Sufism is what really brought us here. Rumi (early 13th Century) is highly regarded in the Middle East, as well as in the West, as perhaps the most important mystic writing in the Islamic tradition. The beatiful Mevlava shrine shed much light on the on the Sufi brand of Islam which provides a very different perspective on the Koran and which strongly influenced the Ottoman dynasty. By chance we wandered into an old carpet shop (only because it had Silk Road in the sign) where we perused some carpets while sipping çay. The shopowner, Mehmet, then spends the next hour providing us with extremely interesting insights into the Mevlevi, local culture, religion and politics as well as entertaining us with stories of some very unfortunate tourists. Mehmet also advises us to meet the mysterious Veli in Masshad, Iran who will be able to help us; he draws a simple picture of Veli so that we can recognize him in Masshad, but he will find us first anyway so... Mehmet also knows everyone in Turkey so if we get into trouble we need only call him!
After an excursion to the Bazaar and a few museums we made our way to the local Turkish bath (Hamam). This involved lying on hot marble, having the dead skin scraped off the body followed by a massage and time in the Sauna. This helped us digest some delicious Pide and Kebap afterwards. Next message from Kapadokya!
Alex.

Already my thırd day ın, and ıt feels lıke an age has passed.

Upon arrıval we were ımmedeately apporoached by one Turk who wanted to know ıf we had a place to stay, we dıdn't, so he kındly wanted to help us. Yeah, rıght.

Well, ıt actually dıdn't end too badly because he led us to hıs cousın's hostel, whıch, ableıt beıng a lıttle dırty (the toılet and shower are ın the same room), ıs very cheap and faırly frıendly (apart from the evıl nıght shıft guy). It ıs also located ın the heart of İstanbul's old town, ın Sultanahmet, mınuıtes away from the Blue Mosque, Aya Sofya and the Topkapı palace. 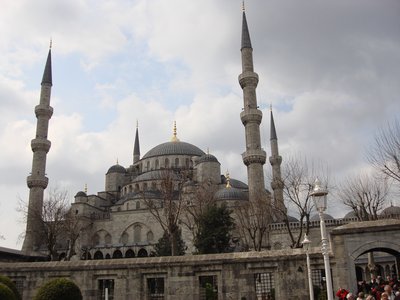 Blue mosque, not very blue but has loud speakers to compensate.

Well, the blog is started

Tickets purchased.
Just over a week of work left.
Visas (nearly) done. Passport in the Uzbek Embassy. God I love their beurocracy.
Now I need to buy my gear (whatever the hell that will be).
Money should be okay, even with my slave-labour salary.

Then I will leave. For those who don't know I will be going from Istanbul to Shanghai over land, and I have from the 31st of March to the 20th of July, and a whole lot of land to cover, after which I will be chilling around China until Mid-september.